As the only kayaker attending a Balkan Rivers Conference in Belgrade, Serbia in 2015, Rok approached river conservation almost by accident. He also approached it from a very different perspective. Standing at the bar one night, he realized it was time to act. He had enough of listening to complaints about funding, organization and bureaucracy needs in order to stop 2.700 proposed dams to be built on the last free flowing rivers of Europe, on his doorstep in the Balkan Peninsula. These conservation organizations were doing great work, but the level of direct action wasn’t there yet. He noticed both individuals and organizations lacked courage to stand up to the attack of rampant hydro power development. He wanted to do something simple and effective in a more down to earth way and give people option to join is and get involved directly.

So the next day he drew a sloppy red line on Google Earth map of the Balkans and told the room of scientists and conservationists that together with his friends they were going to kayak all these rivers in the spring, to show the Balkans–and the world–what is at stake if these rivers get dammed. They would paddle to defend the rivers. The Balkan Rivers Tour was born as a rebellious promise given to both locals and the global river conservation community. River conservation should first be about fun and enjoyment of rivers and second about saving and conserving them. This way you get a perpetuum mobile, ever intensifying the drive to do the hard work.

We started Balkan Rivers Tour (BRT) flying by the seat of our pants. What started as a crazy idea turned into the biggest (and most fun) direct river conservation action in Europe. After two years and two tours, BRT has evolved past just a ‘tour’ and has turned into a movement. A movement in defence of wild rivers. It’s time to take on a new name, but to carry on the same mission; defending wild rivers of Balkans. We are changing our name to BALKAN RIVER DEFENCE (BRD).

Balkan Rivers Tour (BRT) will still exist, but it will represent the annual paddling and protesting ‘Tour” we take through the Balkans. BRD is the group; the family, the hand. BRT is the event; the party, the megaphone.

BRD is an experiment. There is no fixed plan for a year, sometimes even for a month ahead. Having no fixed plan at beginning was the best thing as it enabled the BRT to evolve into what it is now; something that works by bringing people together for a common cause in an interesting way.

After 3 years it has become clear that our job is not to fight HPP at court cases or invest, research or focus on only one river; it is about creating a movement– a shift of the perception of dams, making nature conservation cool, accessible to everyone and fun. We are the ambassadors of rivers, the simple people that address society and raise awareness in a way that we get heard, not boring people into reading a 300 page document. We are connecting dots by bringing adventure sports communities and nature conservation organizations together. Where kayakers and fly fishermen become friends. We are helping small, local NGOs get exposure in international media. We are bringing crowds to creative protests. We are addressing international public and bringing people from around the world together for the cause and fighting for the Balkan rivers. Often using unconventional approaches, we are trying to make shortcuts to stop dams and save rivers.

Balkan Peninsula is a special place. Ecologically and culturally. Complicated history and politics make this part of Europe very difficult to understand. Our intention is to unite Balkan nations against the destruction of their rivers and the attack of neocolonialism in the form of hydropower. In other words, rivers are one of the rare things that connect nations here and we wish to nourish that. Rivers are being attacked by foreign investment that seek to profit from this ‘less developed part of Europe’ by exploiting the current political situation and rampant corruption to further their greedy goals. The people of the Balkans saw enough of that in the last centuries and rivers are one of the only things we have left.

Some of our team are from the Balkans, some are from all over the world. We want to help locals fight their own fight. Nature conservation is often more about sociology and psychology than it is biology. It is people who sit behind a table and decide that a certain river should be left untouched, not snails unfortunately. We hope that people are encouraged by our story, and that BRD serves as a kickstart to enhance or start their own fight. We will do everything to help them start and connect them to other small groups. A small fish can be chased by a big one, but a group of small fish can turn and chase down that big one too.

THIS IS WHAT WE ARE STANDING UP AGAINST TOGETHER: 2.700 PROPOSED DAMS 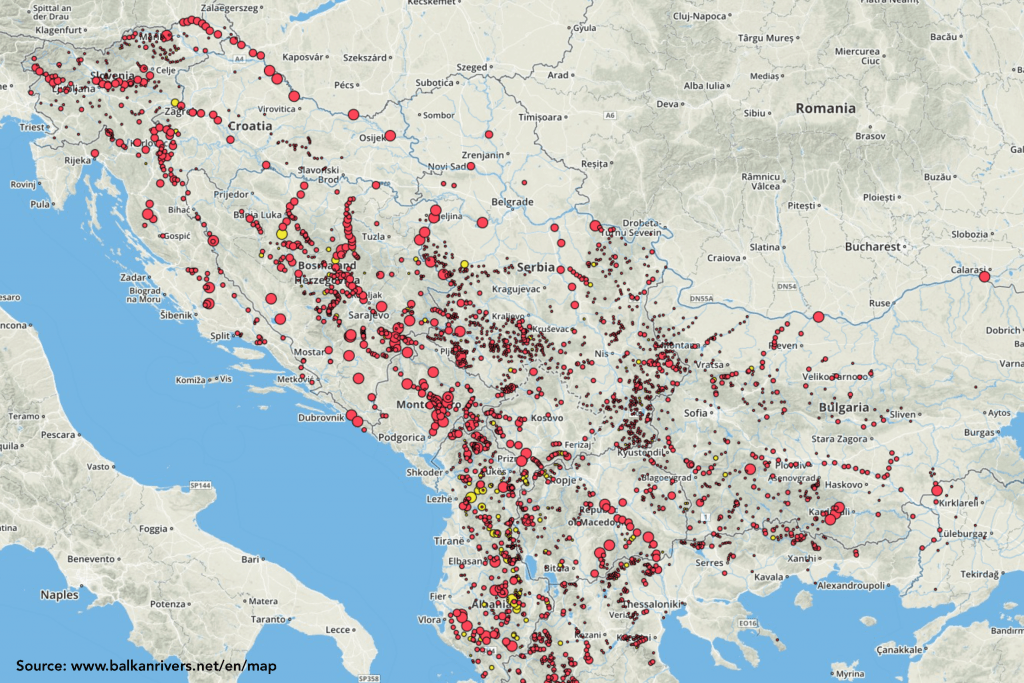 Balkan River Defence and Balkan Rivers Tour are run and led by the NGO Leeway Collective, Institute for Promotion and protection of Aquatic Ecosystems.

Find out more or adjust your settings.