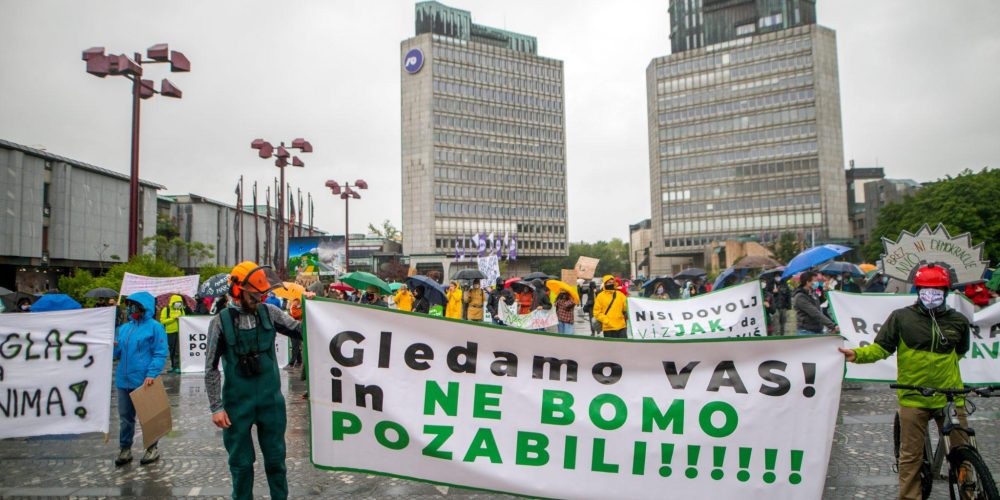 Tuesday May 12th 2020, was a jam-packed with all sorts of events. Most of them extremely shocking and negative, but there were also some positive and inspiring ones too.

The overcast day started with some fresh news and political dribble around the proposed amendment to Slovenia’s Nature Conservation Act. The Slovenian coalition government – which is comprised of the center-right Slovenian Democratic Party (SDS), the center-left Party of Modern Center (SMC) and the conservative New Slovenia and the pensioners’ party Desus – announced a unified vote, and there were rummors about a possible change to the proposed amendment.

When the rain started to fall, it was time to protest. At 13:15 about 15 people roamed Ljubljana’s Republic Square, the open area facing Slovenia’s parliament buidling. Around 13:25, there were 50. And by 13:30 a cheerful crowd of nature (and common sense) supporters trickled in, walking and biking in from the surrounding streets. Spontaineously, a colorful protest developed, decorated by homemade banners, artistic masks, umbrellas, flags, and music, who came together to chant »Narave ne damo!« (We won’t give up nature). Opinions about the number of people who came to stand up against the greed of Slovenia’s members of parliament (MPs) varied. Policemen underestimated about 300 of us, we rounded our count up to about 1000. If we say 800, we are the closest to reality. But all this is not important at all. Even if just one single person stood out there, representing nature that doesn’t have a voice, that would have been meaningful enough…

By 14:00, the MPs had received around 11.000 emails as a part of the action »Hail of emails to members of the parliament«, which is in fact a new record for the country, as the largest similar action supposedly involved 2.000 emails.

At 14:10 Rok Rozman said goodbye to the protest and walked into parliament to represent both the voice of nature and the voice of the protesters in the rain outside, during in a parliamentary session of the Committee on Infrastructure, Environment and Spatial Planning, where an item on the agenda was voting to accept or reject the proposed amendment to Slovenian Nature Conservation Act. Shortly after the amendment was introduced as a topic to be discussed, the rumors were confirmed and the SMC party put down an amendment to the amendment to the abovementioned act. This was a sort of a strategic retreat to a less sharp – but still completely unfounded and unconstitutional intervention – into the rights of nature by disabling nature’s only lawful representatives; the NGOs with a status of working in the public interest of nature conservation.

The first to speak was Minister of the Environment and Spatial Planning, Mr. Vizjak (from 2:27 on), and right after him the Legistative and Legal Service of the Parliament presented their opinion (from 2:32 on). This session can be viewed here: https://4d.rtvslo.si/arhiv/seje-odbora-za-infrastrukturo-okolje-in-prostor/174692584?fbclid=IwAR370iciBxS-Vg2jKp83pqax2gDOi0Uid_Uh2l1AjsjpwDeOT7OxUYmZzwQ

Next, Goran Forbici (Director of CNVOS, Centre for NGOs) and Rok Rozman (Director of the NGO Balkan River Defence), where given the chance to address the MPs. A tumultuous debate by members of the parliament ensued: https://4d.rtvslo.si/arhiv/seje-odbora-za-infrastrukturo-okolje-in-prostor/174692585?fbclid=IwAR05y3FmtpIPIS-EBd0GMZOm7fIxlLAZAMnBkTRkiZocXkSrh2E6rTet1Ao

The voting process occured from 47:30 on: https://4d.rtvslo.si/arhiv/seje-odbora-za-infrastrukturo-okolje-in-prostor/174692583?fbclid=IwAR0-9oZcCsw_rDEIt4Ea5HTQbRaRTAnUFkmqcxGzdHRIZrybxPUernUkfyc

The matter has not yet been legally confirmed. The Parliament will vote on accepting the amendment to the Act at a plenary session. They do have the power to reject it, but this is not to be expected. There is also a possibility for the National Council to submit a veto to it, but knowing who the members of the Council are, this borders on science fiction.

Links to MEIDA reporting on the topic (in English):

Links to MEDIA reporting on the topic (in Slovenian):

We are convinced that the amendment to the amendment, submitted in the last minute, is a clear evidence that the politicians in the coalition fear the pressure of the public which was displayed through the email campaign and the protest outside. Nevertheless, by voting for it, they truly did poke the hornet’s nest and in longterm, shot themselves in the foot. The events of the day are proof that nature does have the capacity to break down artificially created barriers among Slovenians and unify us in the fight for what is right.

Tuesday, May 12th 2020 will no doubt chonicled in the nation’s history regarding Slovenian nature, activism and democracy. But the coming days and weeks will define just how it will be written; as a start to a new story or as a tumultuous continutation of the old one.