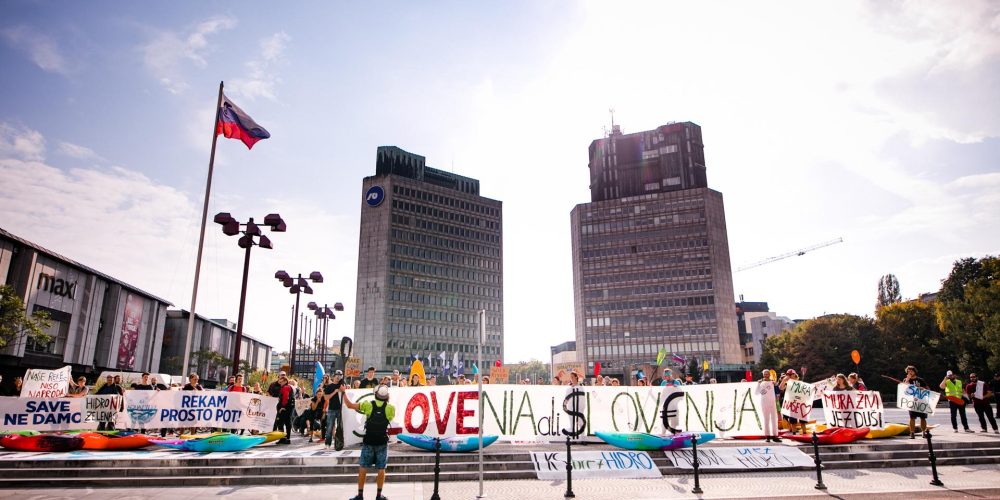 Paddling into downtown Banja Luka.
Dropping mini waterfalls on the Mrežnica.
Flotillas on the Mura and Sava.
Final protest in Ljubljana.

A misty morning on the edge of the Vrbas River in Bosnia and Herzegovina turned into sunny day on the river where the crew got into some fun whitewater and lots of laughs. As the Balkan Rivers Tour Team floated into camp, a riverside press conference was waiting for them. The message we wanted to share was one from the locals along the river. That despite that fact that there are already 3-4 dams on the Vrbas, it’s still worth it to fight for this river. It’s surprisingly still full of life in the untouched stretch and still a place for locals to connect to nature.

Before they build the tallest dam on the Vrbas River, there were few cases of bronchitis in the city of Banja Luka. Now, they have slowed the flow of water and with it the flow of air and the air quality in the city is terrible. We need this river to push cold fresh, mountain air into the city. If they built this last dam they would fuck up the air quality of the whole city.

From the sun in Bosnia to sun in Croatia and had an awesome day on the Mrežnica River, where the BRT 3 team all got some airtime falling off some fun little waterfalls, followed by a great screening of the Undamaged at RafTrek and rock concert/party. 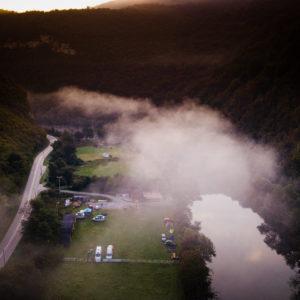 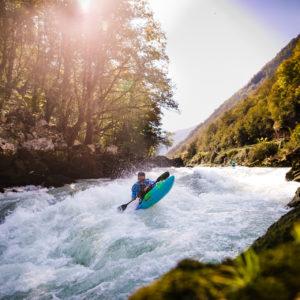 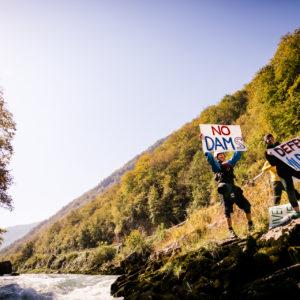 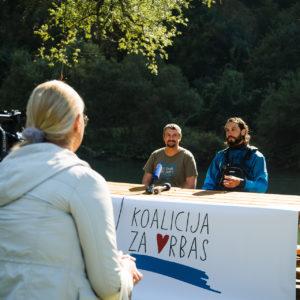 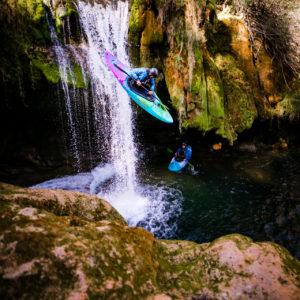 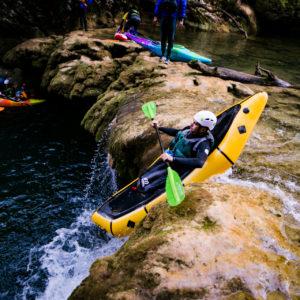 Crossing the border into Slovenia we had two big flotilla paddling actions planned with the official premiere of The Undamaged downtown Ljubljana in between.

Our first flotilla was on the Mura River where the battle has almost been won, and the river close to being declared a UNESCO reserve. We had a loud rowdy crew on the water, enjoying the flow and the company (and the beers).

Premiering The Undamaged to a sellout crowd in Ljubljana was a sign to us that what we are talking about – how dams are destroying our rivers – is getting heard and that we are successful at presenting it in a way that makes it fun, accessible and entertaining. The energy in the hall at Kino Šiška was electric and the whole crew got on the stage to celebrate the last days of BRT 3 and the film itself.

A day floating on the gentle whitewater of the Sava River was just what everyone needed the next day. A massive flotilla came out to show support for this very Slovenian River. SUPs, kayaks, canoes and rafts drifted the river and paused on shore for interviews and high fives after a great day. 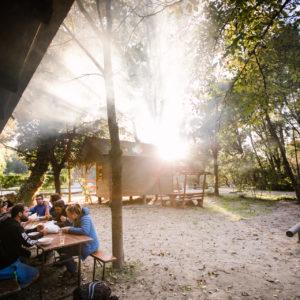 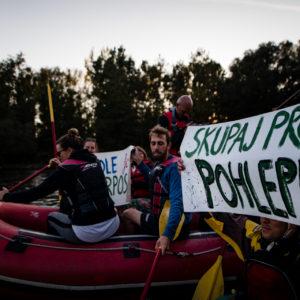 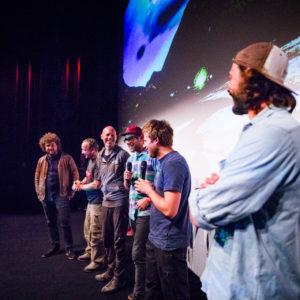 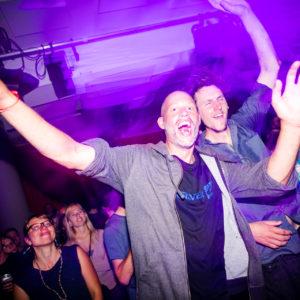 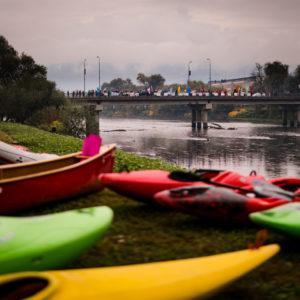 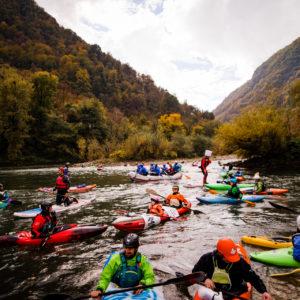 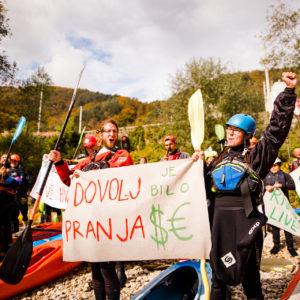 Rivers are what we are fighting for, so it was only appropriate that we used a river to arrive to the final and biggest protest of the tour. The final action and final day of Balkan River Tour 3 saw the crew floating into Ljubljana, making tons of noise, holding banners and spreading the word that we want Slovenian rivers for paddling, for fishing, for ecotourism, drinking water and for nature. Not for hydro. We pulled out boats out of the water and portaged through the city to the Parliament building where we stood across the road from where Slovenian decision makers work for almost 2 hours with a band playing, whistles blowing and holding signs asking; sLOVEenia or $lov€nia? Rok delivered an open letter with demands to stop building hydro dams in Slovenia and re-assessing the idea that hydro is green/sustainable energy.

We stood across the road from where Slovenian decision makers work for almost 2 hours with a band playing, whistles blowing and holding signs asking; sLOVEenia or $lov€nia?

That’s it for Balkan Rivers Tour 3! It’s been a wild ride and an effective tour. We are so happy to meet so many new people and organizations fighting for rivers. Together, we are strong and these greedy guys don’t stand a chance!

With the open letter in defence of rivers submitted, we heard back from the Slovenian Government the following week with a date to meet and discuss rivers. This isn’t the beginning or the end of the fight but it’s time decision makers hear us. 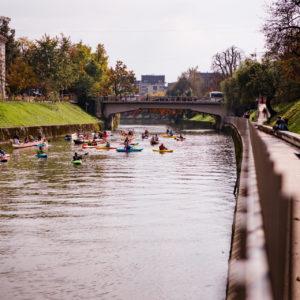 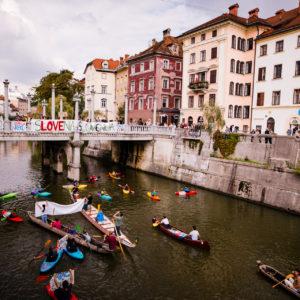 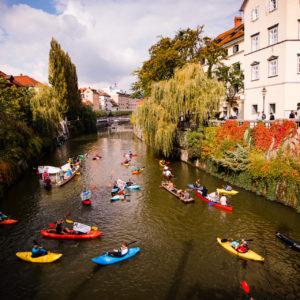 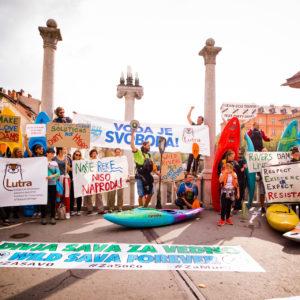 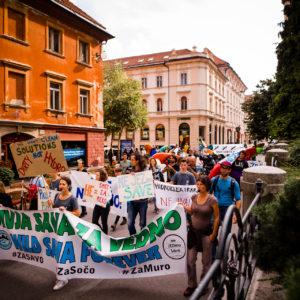 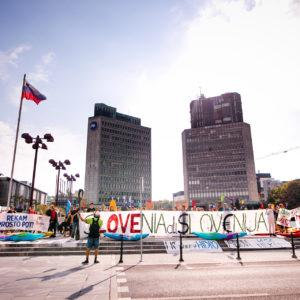 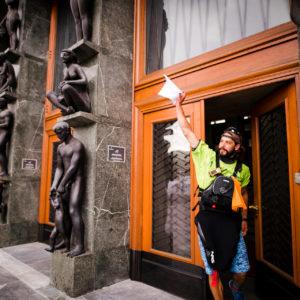 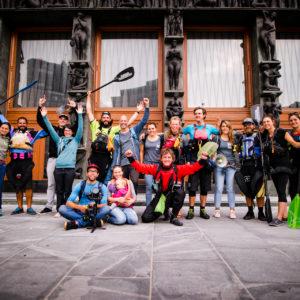 6 dogs on the water with the flotillas

And over 1100 people viewed The Undamaged