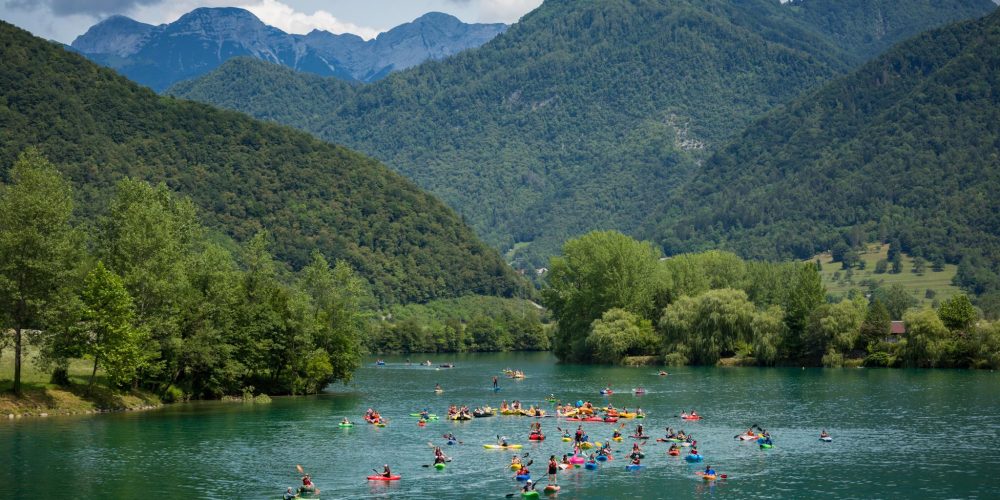 The Soča River. She is where many of the Balkan River Defence (BRD) team learned to kayak. The river they call home. And the main inspiration behind Balkan Rivers Tour (BRT). Basically, what motivated this group of kayakers to take-action and stand up for all the rivers of this region.

So, it’s fitting that we invited kayakers, university students and river conservation experts from around the world to our home, to  celebrate the Soča River during week 2 of BRT4. Together with the River Intellectual’s Students for Rivers Camp, we gathered over 150 people to disrupt the norms of nature conservation, celebrate free flowing rivers, seek solutions to keep them safe and discuss alternatives to dirty hydro….and have fun (and some schnops) while doing it!

There was a special energy to this week of BRT…one focused on solutions. As the official kick off for BRD’s River Intellectuals initiative, the Student for Rivers Camp brought university students from all over Europe, to Kamp Koren’s beautiful conference room, to put their heads together and dive into the existing research related to free-flowing and dammed rivers, as well as solutions to the problem. It was a creative concept that brings students and experts to the classroom and on the water together! And it was a massive success.

“It was fun, inspiring and energizing to have students and experts from 20 countries working together, exploring the problems and the solutions faced by rivers of the Balkans. We are excited by the amount of cool people who have incredible project ideas; SRC is clearly not just a one-week project, but the beginning of something big!” 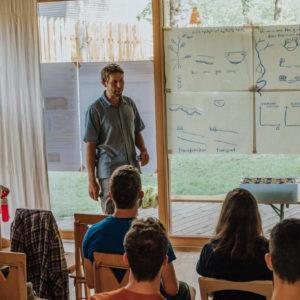 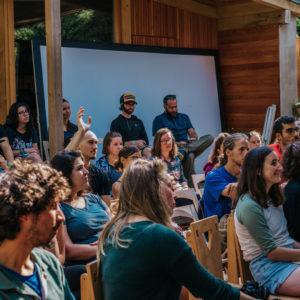 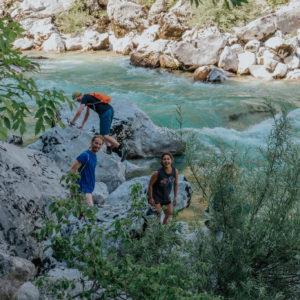 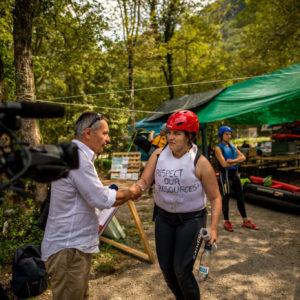 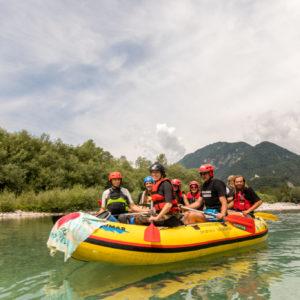 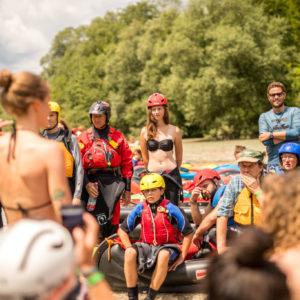 Day 3 of BRT4 was the highlight for many, with a special presentation from the original Soča River defenders – Žarko Mlekuž, Zoran Rutar, Miran Mihelič and Zdravko Likar –  a group of university students who stopped the construction of two dams (HPP Trnovo and HPP Kobarid) on the Soča in the 70’s. They used their brains, creativity and common sense to make sure this river is still running today for all of us to enjoy. Their presentation was full of information, old newspaper articles, laughs and an image of what the town of Bovec would look like if the dams had gone through….a massive reservoir filling the entire valley. 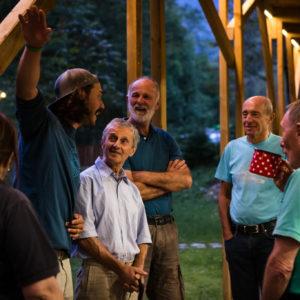 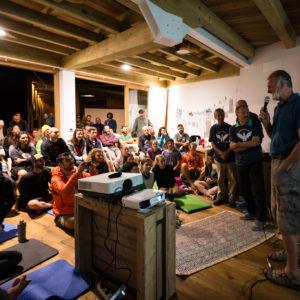 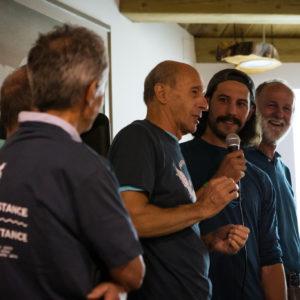 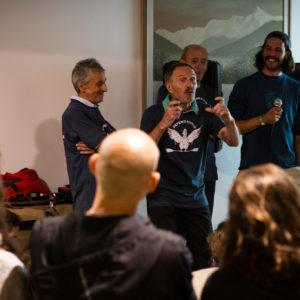 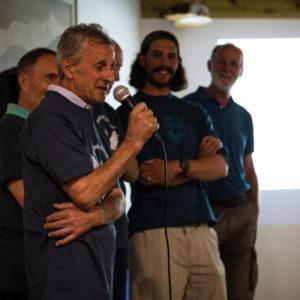 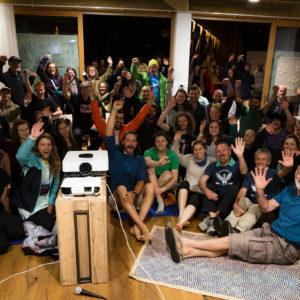 It was a special week to celebrate rivers all across the Balkans with protests and direct actions taking place in every country from Slovenia to Albania. The focus of #BalkanActionWeeks (organized by Riverwatch and EuroNatur), was to gather environmental activists, NGOs, civil society organizations and locals from across the Balkans to raise awareness about the impacts hydropower projects have on local populations, leaving locals without homes, arable lands, drinking water, and irrigation supply, or the landscape they have enjoyed for generations. Our #FreeSoca Flotilla on Saturday was one of these events, and we were blowing our whistles, shouting and cheersing to support all those affected by dams and tell decision makers they can’t dam or damn our rivers!

As all kayakers know, having hot food ready when you get off the water is more a dream than reality. This week was an exception. We had an epic cooking team making magic happen with local ingredients! Thanks to everyone – from the farmers, the baker, the egg producers and the cooks – for keeping our brains and brawn well-fed! 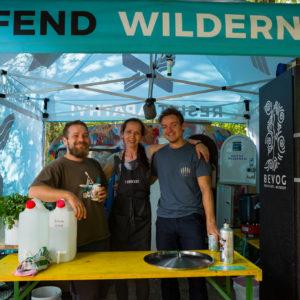 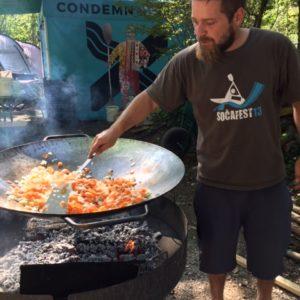 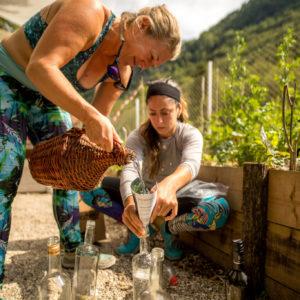 Between dinner and beer o’clock each night, we put on a mini film festival, showing a collection of river-conservation themed films from around the world. We screened Confluir, about Peru’s Maranon River featuring BRT3’s Benny Webb; Patagonia’s Damnation and a special presentation by Anup Gurung about his Mission East to West including three of his short films about his trip in Nepal and finished with a screening of The Undamaged beside the Soča River in Tolmin. BRT4 mini film festival had great attendance each night, (despite huge daily rain storms), and offered a chance for locals to mingle with students, raft guides to chat with professors, and every kind of conversation in between! 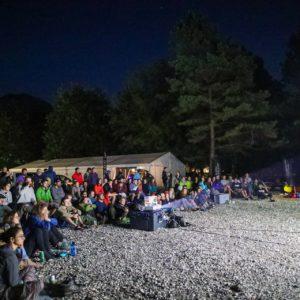 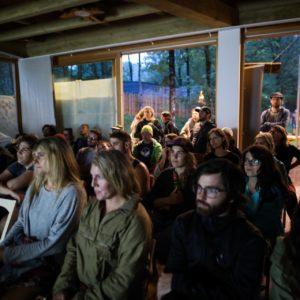 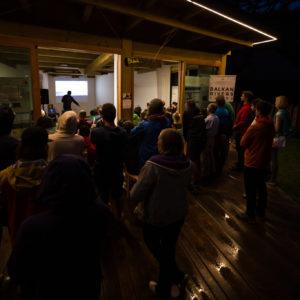 The solid crew of BRT kayakers spent 4 mornings on the water, running the entire whitewater section of the Soča, from Čezsoča to Tolmin. They also spent the last day of BRT4 Slovenia paddling the flat, slow and eventually stagnant segment of the Soča as it runs into the dam in Most Na Soci. 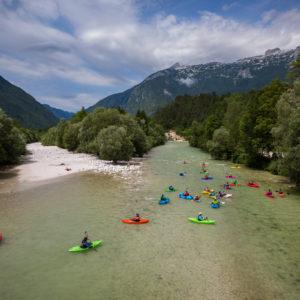 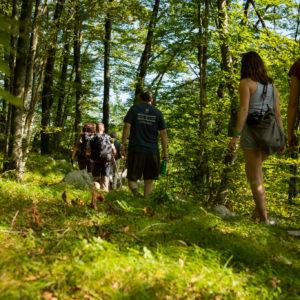 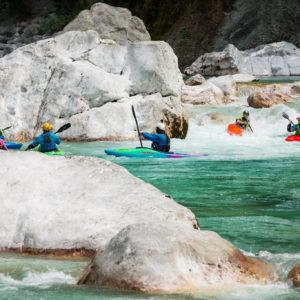 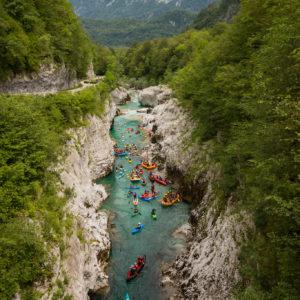 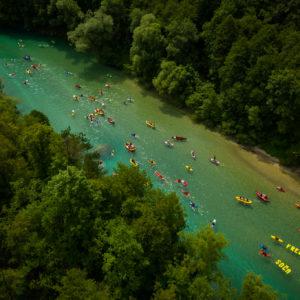 See what is hidden below this reservoir in a short film we made last year when they released the water behind the dam to clear our thousands of kilos of sediment built up behind the dam.

Direct action is what we do. Sure, we have fun kayaking beautiful whitewater, we drink beer and hang out. But turning this good energy into a collective voice is what makes our form or nature conservation different, effective and exciting. So, we took to the water again – 150 active river defenders/kayakers from 23 countries, from Peru and Nepal and everywhere in between! With a loud message of celebration, recognizing all that the free-flowing Soča gives – to local economy, to the tourism industry, and to the fishes. And with this, we also put forth another message…the idea of removing a barrier on the Soča. Of setting a new standard for the Balkans…that parts of Europe and America are re-wilding rivers and removing dams, which not only goes against the idea of building more, but introduces the possibility of freeing up 20 more km of the Soča for enjoyment, recreation, fishing and tourism. 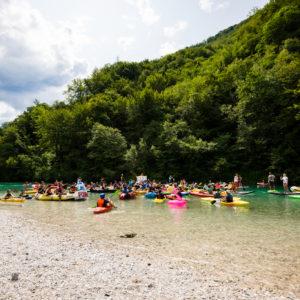 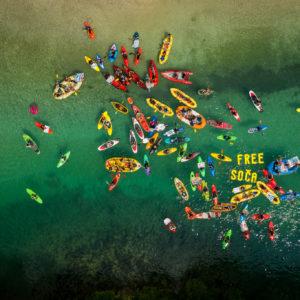 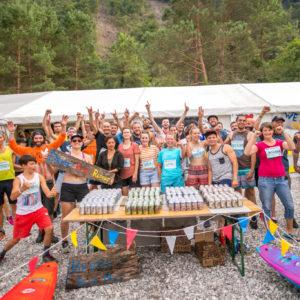 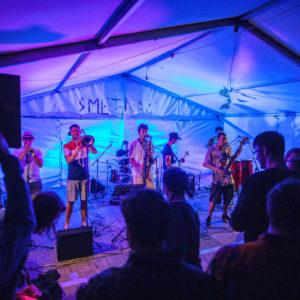 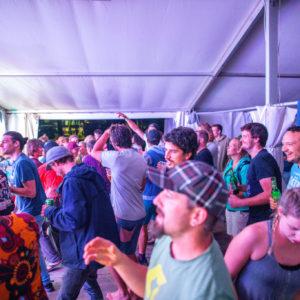 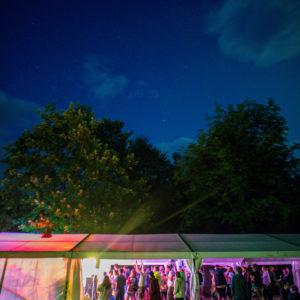 “This week was a proof that we are not lacking in energy, dedication or passion. The Soča Valley is a great example of what we do – if we manage to keep rivers wild, they could be the starting point to develop sustainable tourism and provide a bright future with space for everything, except greed,”

With all the momentum, ideas and action, we are getting ready for BRT4 | Week 3 in Bulgaria.
Join us for river defence and fun, September 24th – 29th! It’s going to be a cool autumn endeavour, so get ready for it!