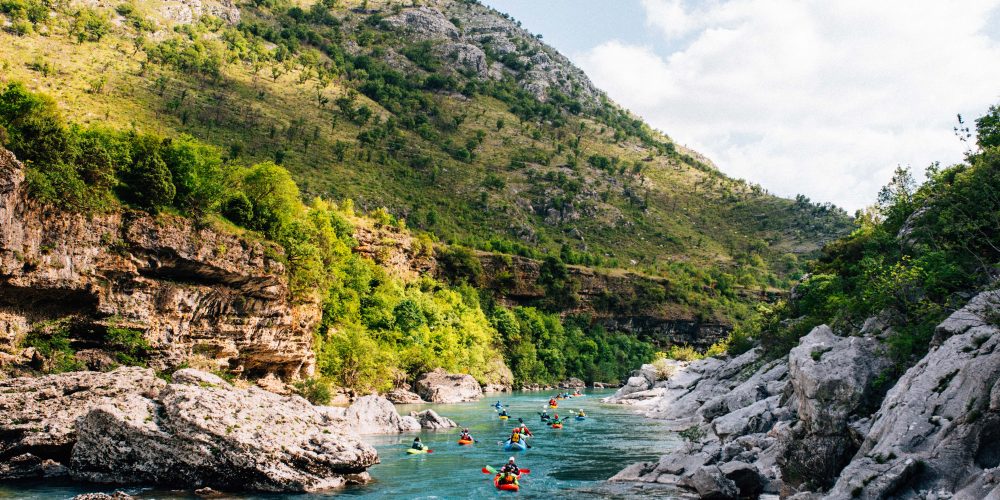 There is a special connection formed, between a paddler and a river, when it’s paddled from source to sea. Seeing the changes of the rock formation and vegetation. From alpine shrubs and rock gardens, to stark canyon walls with dancing grasses and fig trees, the changes are visible but also tangible. The air and the light changes; the volume and the power of the river too. This power is something that as kayakers, we seek. We respect and we cherish. But for other, for people who haven’t been deep within the canyon walls, for people who haven’t felt the euphic freedom of a perfectly executed boof, this power is seen as something to be harnessed and sold.

The Balkan Rivers team was lucky to have the chance to experience Montenegro’s mighty Morača River in this way. They built a relationship with the river. They gained respect during the 1.5 days paddling the continuous, bony flows of the upper Morača. Low water levels provided challenges of their own, but also revealed the potential of this technical river at higher flows. Humility and wonder grew from the fun drops and sections of playful whitewater in the middle portion of the river. These class II-IV rapids are intermittent with mellow sections of flow, where paddlers drift through sprinkling waterfalls, and stare up at the hundred foot canyon walls. And an admiration was fostered for all the life that the waters of Lake Skadar feeds.

Interacting with locals along the way, it’s clear to see what this river means to the people who are still living in close connection with nature. A fisherman along the side of the river talked about how just a few years ago he caught a eel in these waters, proving that this species, which migrates from the coast of Canada, was able to travel unobstructed, to the canyons of the Morača. This is significant as traveling high into a watershed via a river is something that is impossible on so many European rivers now because of dams. BRT hopes that by sharing these stories, and the images of the Morača, we can help give the river a voice and the people fighting for it some extra momentum.

On day 4 of the Morača Action, BRT brought together a number of different groups and organizations fighting to protect the Morača. This was the first meeting of it’s kind, and the round table vibe of the meeting, and causal dinner and drinks atmosphere allowed for networking and discussion about how groups can work together for the common purpose of saving the Morača from the 4 major dams proposed to be built on the river, and the many slated to be constructed on the tributaries. Groups that participated include Za vode podgorice ,Rijeka je zivot, NGO Peručica and many individuals that are not part of formal NGO or organizations but that are also resisting the dams.

Montenegro has been identified as one of the sunniest countries in Europe. If we can develop and design dams that are hundreds of meters high, surely we can design solar and wind power that can harness the power of the natural world, without destruction. The BRT team physically experience this power in each country it visited; the high winds of the Pindus Mountains of Greece, and the strong sunshine in Albania and Montenegro.

These are forms of energy production respect nature, and don’t destroy it. These are the kinds of alternatives that we want to see included in dialogue. If we can show the tourism potential of these rivers, and offer alternative ways of producing energy, maybe the next generation can paddle, fish and swim in the wild waters of the Balkans. BRT aims to destroy the myth that hydro energy is green and clean and sustainable. We want to share with the people – with paddlers and locals alike – that success can come from hard work and perseverance protecting a river. The recent success story of the Vjosa battle as a court case has just showcased that it can be done even thought it sometimes seems close to impossible! Hats off to all involved in this passionate and sincere fight for the right!

Once again we proved that we can have power in decision making if only we decide for that and lift our asses from sofas and do something. At the end it is as simple as that – If you love a place you have a duty to protect it. Get out, experience Mama Earth and help her!