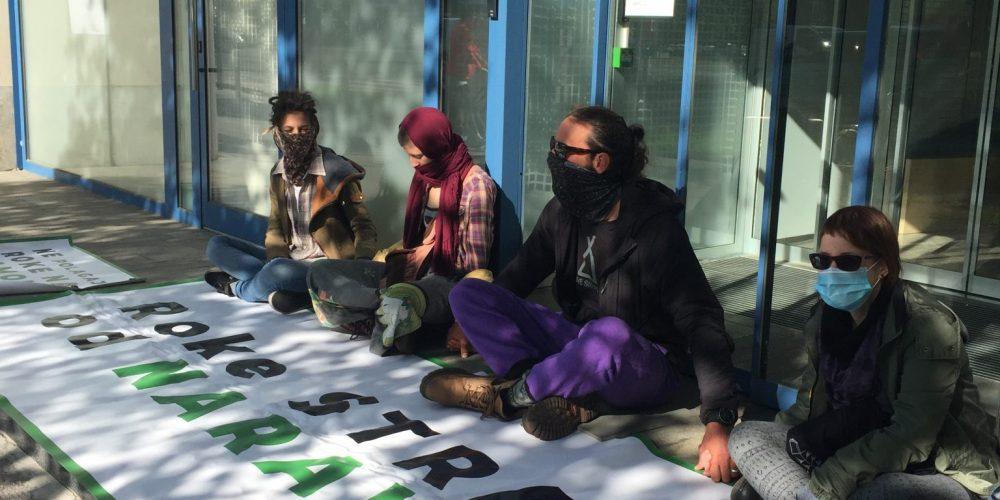 At 8:00 am on Tuesday May 26th, two groups gathered in front of both Slovenia’s Ministry of the Environment and Spatial Planning (MOP) buildings in Ljubljana. They were there to protest the third anti-corona legislation package that will be voted on during a late-night parliamentary session later that day. If approved, the legislation would abolish virtually all nature and environmental safeguards for the construction of large facilities until the end of 2021, dismantling the system of protection for the environment, nature and human health.

The protesters were not physically preventing anyone from entering the building; footage of the protest shows people walking in and out with ease. There were no whistles or shouting. Just concerned citizens sitting down to stand up for Slovenian nature and democracy.

“With the protest, we wanted to show that they will have to step over people if they want to continue stealing nature.” – Rok Rozman

People walking in and out both of the Ministry of the Environment and Spatial Planning buildings – as well as people walking by on the street – made comments of encouragement, approval and support.

After 90 minutes of sitting peacefully at the front of the building on Dunajska street, police arrived and physically removed the 4 protesters including Balkan River Defence founder Rok Rozman and Marin Medak who were taken away by police and brought to the local police station. Three received fines of 583 and one 383 euros, for disobeying the order of a police officer and for refusing to show personal documents. As seen and heard in the video footage, they refused the request to show documentation to police because the police assured them that they would be taken away from the protest site either way.

The protest in front of both MOP buildings continued until 14:00 with members from Slovenia’s Youth for Climate Change carrying out the sitting protest late into the afternoon.

The petition called Narave Ne Damo (We Won’t Give Up Nature) surpassed the goal of 20,000 signature in just 4 days.
To support Slovenian nature, you can sign the petition here www.naravenedamo.si and read more about it here.

More details about the Slovenian government’s recent actions can be found here: www.balkanriverdefence.org/news/

Just as comparison; we made same type of action in Albania, which is known as one of the most repressive European countries with weak democracy, in Valbona valley in 2018. We blocked a very controversial construction site with our bodies which made the investor and the lead constructor very mad, but the police was there to safeguard us. Video about action in Valbona: https://vimeo.com/306502467