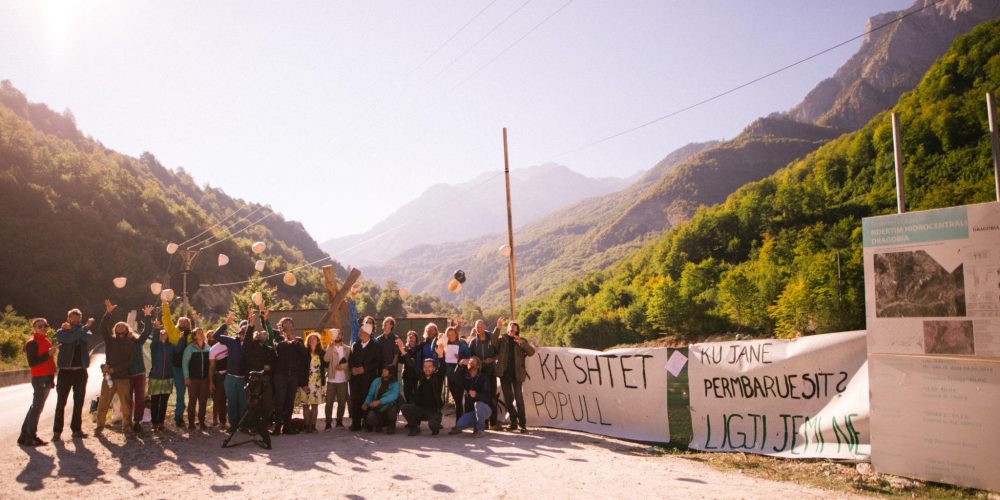 A blockade in Valbona NP.
Portaging through the city in Podgorica.
Partying and paddling at Kayak Fest Tara.

It was cold and dusty sitting on the ground, but the most painful part was the view of construction site. Just over a year ago the BRT 2 team were in Albania’s Valbona National Park and witnessed the start of the construction of the hydroelectric dam. Now, a wall has been built and the river is almost stopped. After a wild year of court cases, appeals, and all the twisted, corrupt acts you can imagine in a country where the prime minister owns shares in the hydro electric company destroying their wild rivers, we wanted to show our support…emotionally and physically. We made a plan together with local NGO TOKA leader Catherine and elders from surrounding villages and at 6 am on September 17th we put it in action.

Two guys in expensive cars arrived, shouting, pointing, and threatening us with jail time. We just sat there.

When Ben Webb, an BRT3 team member and Aussie river conservationist stood up to show the Gener 2 construction manager the legal document outlining that the dam construction in the National Park was illegal, the big dog in the fancy car and expensive clothes was stumbling over his words and left with a soaring heartrate and red face. The police were present. But they didn’t act. This was a clear sign that what we were doing was not in fact illegal, and it showed the simple power of peaceful action. We were simply making sure the law gets enforced in reality by putting our bodies in the way of machinery that couldn’t get into construction site. Imagine we were able to do that every day until the final court rulings went through?! 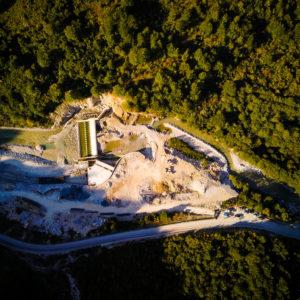 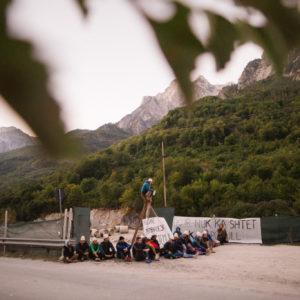 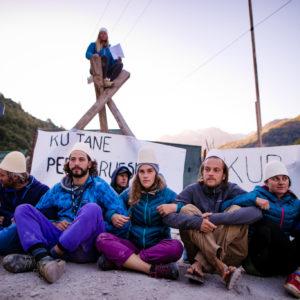 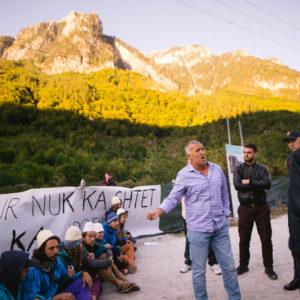 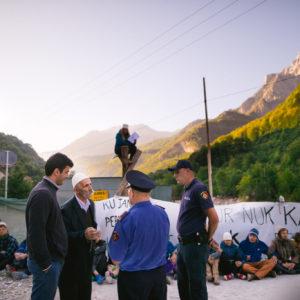 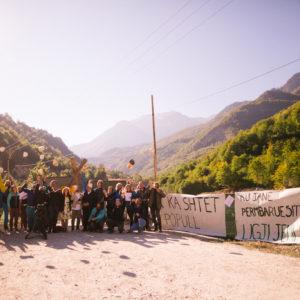 Walking through the streets of downtown Podgorica, the BRT3 team mixed with locals, carrying banners, blowing whistles, chanting “Mo-ra-ča”. In a city where in the past we have had trouble getting locals to attend protests or actions, we were pleasantly surprised to get around 50 locals out for the River Walk for the Morača, marching past the President’s office, Parliament building and National Bank carrying kayaks and signs. As we walked small group formed, discussing what this river means to the people of Montenegro’s capital city and the potential this river has for eco-tourism.

The Morača is an oasis in the city – it’s a place to get away and be by the river.

This is what a local man said the river means to the people of Podgorica. When the walk ended and we put our boats down for locals to go paddling in, the sun started setting on the city, lighting up the river that snakes through it. Locals started to descend to the river, looking on to our group but clearly doing what they would do on any night. They peppered the shoreline, kids throwing stones, teenagers smoking cigarettes and gossiping. It was clear that this river means a great deal to this city. 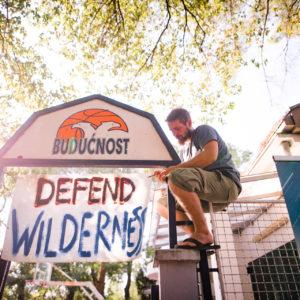 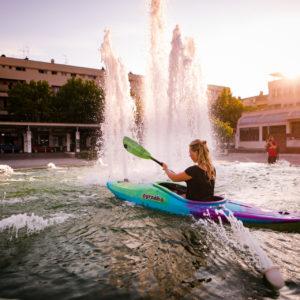 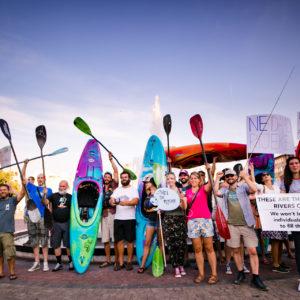 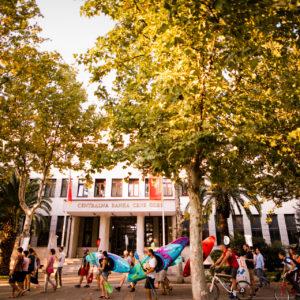 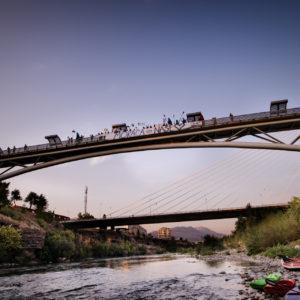 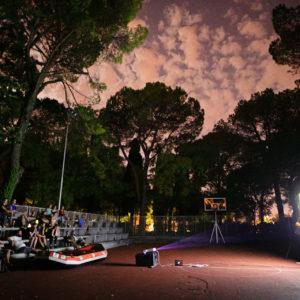 Up until now, the tour has been charged with energetic and emotional protests, exciting days on the water and 7 screenings of The Undamaged, it was time for the BRT3 crew to get back on some whitewater and recharge the batteries. Kayak Fest Tara proved to be just what we needed; a chance to enjoy the rivers we are battling to defend, and the opportunity to do it in style! Off the race ramp we went! Beer was flowing, energy levels were high and the BRT3 team put in a solid showing, taking 4/6 podium spots in the men’s and women’s divisions!

It was time for the BRT crew to get back on some whitewater and recharge the batteries!

The Camp Grab crew did an amazing job of keeping the 300 racers and spectators well-fed, well-watered and well-entertained! The whole festival crew gathered on the beach during the final day of competition to show their love and support for the Tara, and shout out their collective opposition to the Buk Bijela Hydropower dam on the Drina which would flood the confluence of the Piva and Tara rivers, putting the very beach we were standing on, possibly under water. It’s loud and it’s clear, sustainable eco-tourism is far more valuable than hydropower dams. 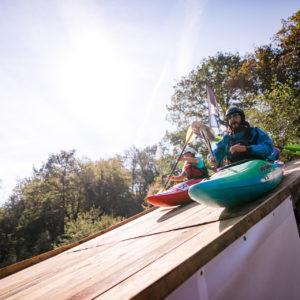 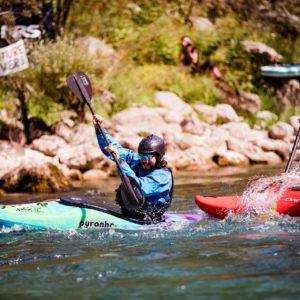 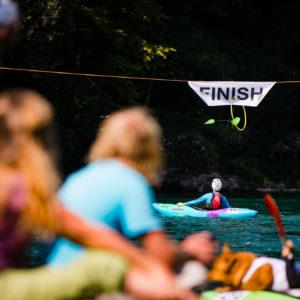 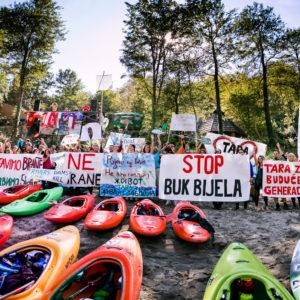 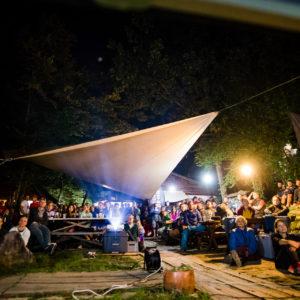 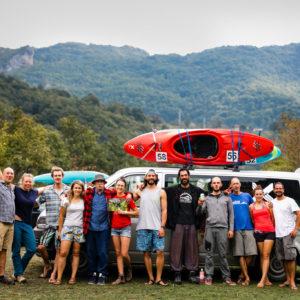