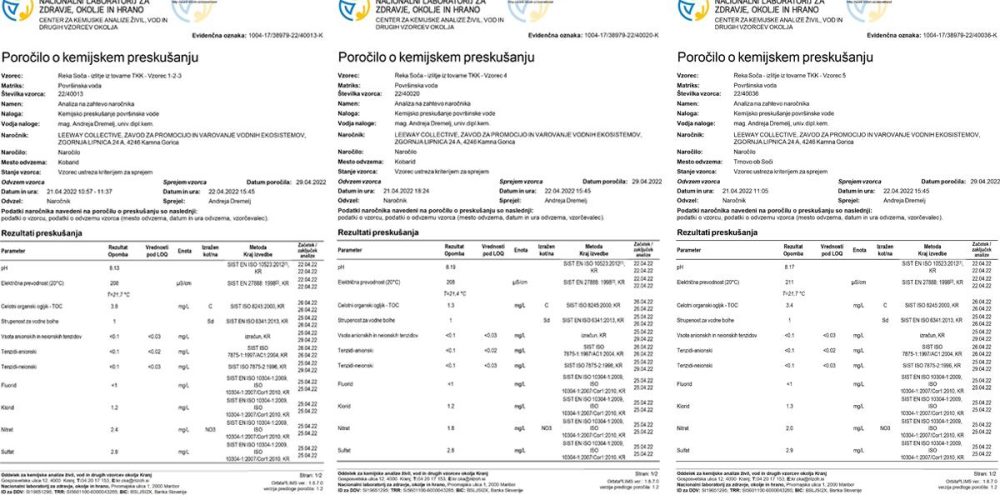 Fortunately, the results of analyzes of water samples from the Soča taken on April 21st 2022, the day of the spill from the TKK factory, do not show excessively high levels of toxins or excessive changes in organic and inorganic water parameters. There can be several reasons for this; the first is that the spilled substance was not really very dangerous to the environment, and the second is that we took samples too late or too far downstream from the spill site. Of course, we keep our fingers crossed that spilled matter was a substance that will not have major negative impacts on the life of the Soča River and on the health of people who use the Soča for recreation and drinking. Regarding the data on the bioaccumulation of spilled substances in fish and the safety of fish for food, we expect that the competent Tolmin Fishing Family will comment on this.

In addition to all the above, this time the luck was on Soča’s side; the average daily flow at the Kobarid measuring station on the day of the spill was app. 16 cubic meters per second, and in the following days the downpours greatly increased the flow (peak was on April 24th  at 23:00, when the Soča reached a flow of 89 m3/s), which further diluted the substance and pushed it to the HPP Podselo reservoir. Although no major fish mortality has been detected so far, the negative effects of the spill may be seen in the coming weeks and months, when the potential death of larval stages of insects could be reflected in smaller growth or even dead fish.

This, of course, does not solve the problem of the spill. Uncontrolled spillage of ten tons of the substance occurred, regardless of whether it was a more or less dangerous substance. The following questions are relevant to the management of TKK d.o.o. as well as mayors of all three municipalities of the Upper Soča; Bovec, Kobarid and Tolmin:

We publicly call on the mayors of the municipalities of Bovec, Kobarid and Tolmin to make a public statement on the spill and how they see the situation. The people would like to know if their plan includes any measures against TKK d.o.o. and what will be the next steps in possibly devising a more sophisticated intervention plan in the event of reoccurrence of spill. We also publicly inviting the director of TKK d.o.o. to present an analysis of events on April 21st 2022 and answer the above questions.

We are saddened by the fact that local authorities have so far done absolutely nothing to help find the cause of this error, which could cause a real ecological and economic catastrophe, nor have they publicly commented (let alone condemned) the spill. As it turns out, the Soča Valley is truly a wild west, where matters are handled by a handful of well-connected individuals who cover their backs no matter what’s at stake. There is only one river Soča. It is not only a goose that lays golden eggs and offers everyone a source of income, it is also home to many animals and plants, the pride of Slovenia, a source of drinking water for many inhabitants of the valley and, for only a handful, a holy place worth standing up for…