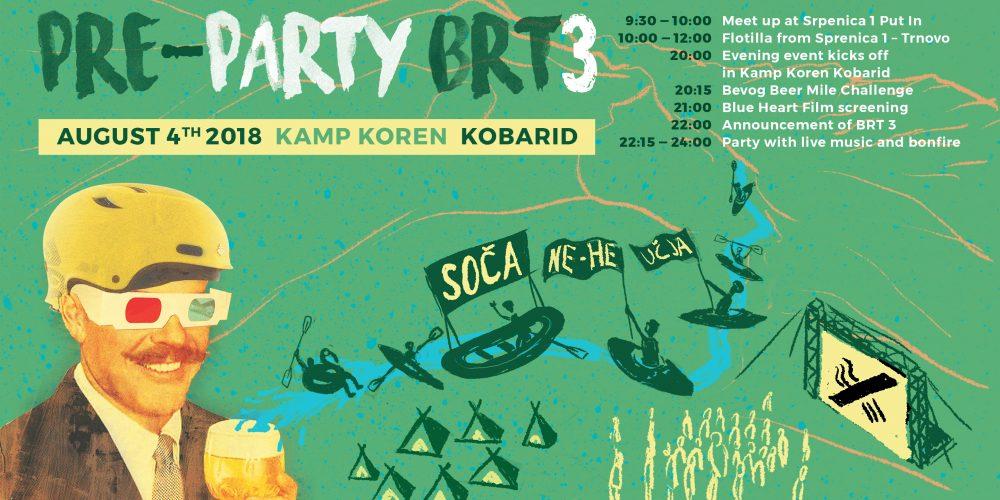 Balkan Rivers Tour will take place in autumn this year. So instead of making After-Party in cold and rainy November we are making Pre-Party in hot and sunny August.

We will use this party and get together as a chance to apply pressure to SENG (Soča Hydropower Plants Company) and demand that they finally cancel plans for the dams on Učja River and upper Soča River.
How? With a big flotilla of rafts and kayaks!
Where? On the Soča River between Srpenica and Trnovo.

Since hard work and creative action should always be awarded… we will make a party afterwards! In the evening we will gather in Kamp Koren to compete with a reason and with style in a Beer Mile event. Run 4x400meters and chug 4 Bevog beers to see who is wisest, not fastest…how good is that! Then we will all sit down to see the film Blue Heart and then the grand finale of the day – the announcement of Balkan Rivers Tour 3, followed by a concert and bonfire.

You can probably find an excuse not to come. But we deeply advise you to avoid excuses, since regret is one of the worst emotions. Insead, join activism, river time, beer running, a movie night and dancing to cool tunes at Soča valley with us.

WHERE?
Soča River between Srpenica 1 Put In and Trnovo 1 Take Out

WHY?
So that we can join forces and show we don’t need and don’t want dam on Učja and Upper Soča River. It is time to demand from SENG to cancel the plans for hydro power plants on these beautiful river stretches.

HOW CAN YOU JOIN IN?
Simple; we (kayakers, kayak schools, rafting agencies with rafts packed with tourists) all meet between 9:30 and 10:00 AM at Srpenica 1 Put In and we start the trip to Trnovo. At 10:20 AM we will all gather in Kreda pool, make a cool drone shot and then paddle downstream in a caravan. It is you that will make this event efficient; the more people on the water the stronger the message and more serious the demand to SENG.
We will provide basic briefing before the start and 1 banner with message in style NO DAMS, STOP DESTRUCTION etc. for each boat. Anyhow it would be great if you make your own banner and use your own message!

GENERAL CONCEPT:
Soča Valley, its inhabitants and outdoor agencies literally live of of this amazing river and its tributaries. Despite the fact that Soča upstream of Tolmin was protected with a special legislation way back in 1976, there are still ideas for new dams popping up from certain individuals and companies. These projects would agressively cut into these ecosystems and opportunities for active tourism in the valley. We here again demand from decision makers to cancel these dam plans for good; Soča already has 7 big HPP and there are 20 small HPP on its tributaries in Slovenia. This flotilla is a chance to show support to the river and say definite no to unneccessary exploitation. Let’s bring individuals, nations, agencies and municipalites together in joint idea to protect this paradise for good!

You can confirm your participation via e-mail info@balkanriverdefence.org or with message on FB event BRT3 Pre-Party event.